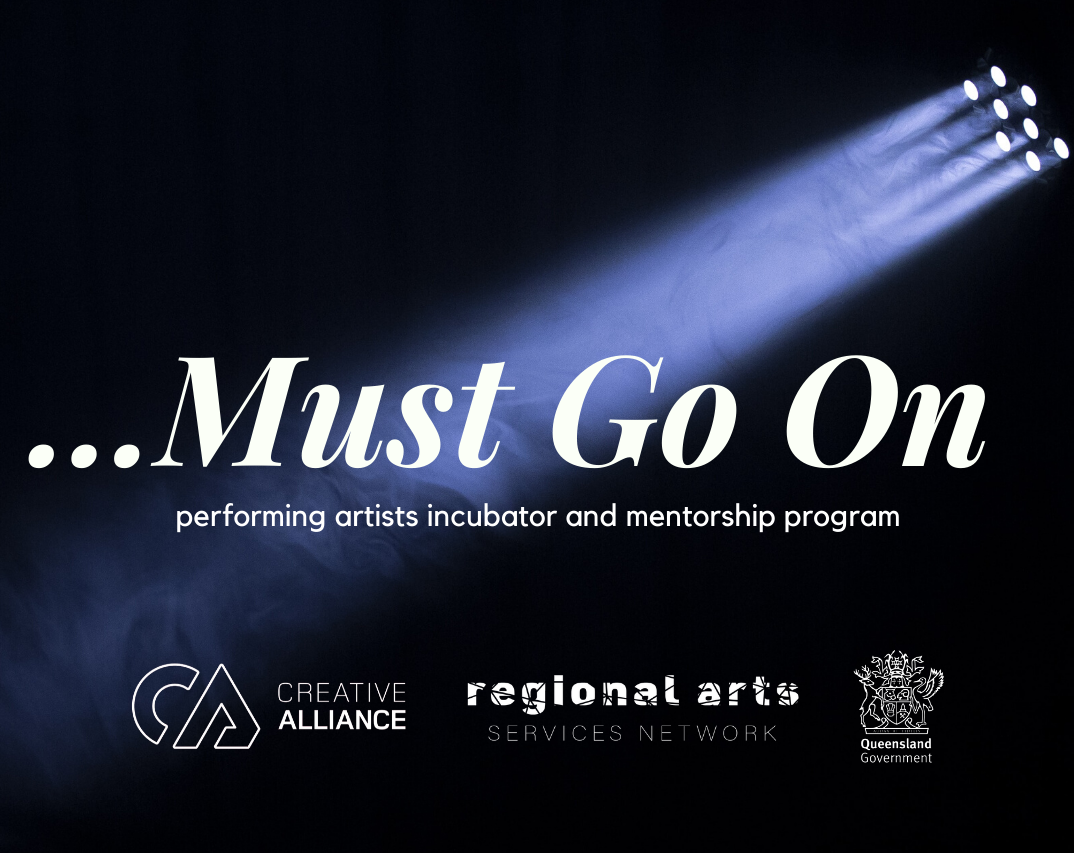 …Must Go On has been developed in consultation with the SEQN Presenters Network, which includes  performing venues, festivals and industry leaders in response to COVID. This new initiative aimed to support the growth and sustainability of the performing arts sector across the  South East Queensland North (SEQN) region.

Through …Must Go On seven performance creators took part in an online incubation and mentorship  program that was designed to collectively support their business and artistic skills, as well as their health  and wellbeing.

Liz Burcham led the program, meeting with artists weekly online to support and test ideas, celebrate  outcomes as well as meet with relevant industry leaders to learn from their knowledge and experience and  extend their networks.

In addition to each artist having a mentor, they took part in weekly sessions with Dr Margi Brown Ash who  specialises in working with artists to strengthen their capacity to sustain artistic practice, be their best self  and achieve their potential.

On 7 September, an online showcase was held where the performance creators had the opportunity to present a synopsis of the works they have been developing to industry professional and arts organisations across the region.

…Must Go On was delivered by Creative Arts Alliance as part of our Regional Arts Services Network  program, funded by Arts Queensland.

About our Artists and their projects

ALEXANDRA ELLEN – Conversations with my Walker

Alexandra Ellen, is a Brisbane based emerging artist: actor, writer and visual artist, with strong connections  with the Redlands. Conversations with my Walker is a new, hilarious, warm-hearted and accessible two  hander that explores living with disability through my relationship with my wheelie-walker, Betsy.

22 is a semi-autobiographical work, inspired by my maternal grandmother who, like many unwed women  of her time, was forced to give up her first child in secret. An exploration of society’s shifting expectations  on young women entering motherhood across the 1950s, 1970s and 1990s.

Going/Coming Home is a new creative collaboration between Sunshine Coast based performance poet  David Knobel and blues musician Alex McKean. This new work examines what it means to be a man and a father.

People worldwide were sold the world of exploration. International travellers in the month of June 2019  were over 3million. In June 2020 it was 64,000. So Near/So Far is a new interactive performance  work that looks at our changing relationship to air travel.

JENNY WYNTER & ANGELINE WYNTER – The Wynter of our Disco Tent

The Wynter of Our Disco Tent is a new musical comedy collaboration between comedian Jenny Wynter  and singer-songwriter Angeline Wynter. Sisters by birth, BFFs by choice, Jenny and Angeline are doing it for  themselves in this energetic 80s inspired musical comedy duo.